I voted new icon. The reason for this is that I’ve used Kontalk a lot since the Kontalk 2 days and have spent a lot of times with both icons, and the new icon looks more consistent with other app icons under material design.

I voted for the old icon, because the colour looks fresh and clean, the new one seems to be pulled through mud.

The logo as favicon looks not so good. Reason: the logo has a space around (why?) and the edge of the real (blurr) icon goes to transparency. Here is the upscaled favicon (top left) and the new logo (top rigth) and (it’s little more work) the old logo (bottom left) and the same logo without space. All graphic-borders are edge on edge to demonstrate the space. 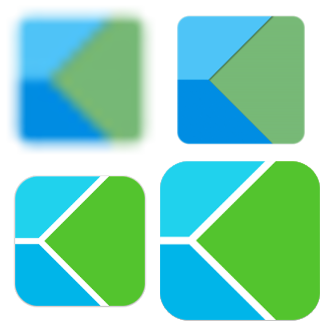 These problems could be easily solved using proper favicon sizes (which is probably my fault when I built the final PNG) and removing the edge (which is also kind of a mistake inherited from the Android app icon).

Am not sure what material design guidelines include, can somebody summarize them in relation to the kontalk icon?

Who designed this @daniele_athome? It would be nice to hear from the designer(s) themselves explaining their thinking before deciding.

I think that ideal shade of colors for me would fall somewhere between the very bright of the old icon and the darkness of the new. And am not sure about that black line on the new one, even though I don’t like the thickness of the white lines on the first one.

We need to mix them into a new icon!

As you can see I haven’t decided yet. Too many fine details in the way!